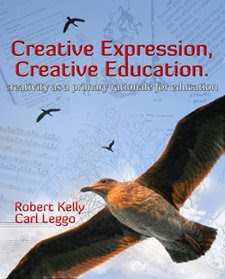 It is good to see our Canadian Creative Arts in Health, Training and Education Journal Advisory Board members making news across the country. I recently came across an article with news about Robert Kelly "Giving Rise to Excellence" written by reporter Valerie Berenyi at The Calgary Herald.

I am including an excerpt from the article below:

"Robert Kelly has a big idea: He wants to drag our education system--which he feels is mostly about convention and producing good little consumers-- kicking and screaming into the 21st century by embracing a culture of creativity.

In his new book Creative Expression, Creative Education (Detselig Enterprises Ltd.), Kelly, an associate professor in The University of Calgary's art department, argues we are evolving from the information age, focused on mass consumption, into the conceptual age, one fuelled by innovation.

Citing the work of writers like Daniel Pink and Charles Leadbeater, Kelly says a culture of creativity is already emerging. He points to the collective energy spurring new entities like open source software, YouTube and Wikipedia.

"If we are to produce engaged citizens," he says, "our education system must learn to balance the traditions of discipline, standardization and measurement with ideas, creativity and collaboration."

"The archetype in art is someone waiting in their studio for some magnanimous vision. But the worst way to get a good idea is to sit in a room by yourself."

Kelly says his book, co-written with poet (and professor) Carl Leggo from the University of British Columbia, is intended to give parents and educators a grounding in creative theory.

The first of three books in a series, Creative Expression, Creative Education was funded with a grant from Alberta Education. It may be used as a resource as the government embarks on an overhaul of the fine arts curriculum for kindergarten to Grade 12. "