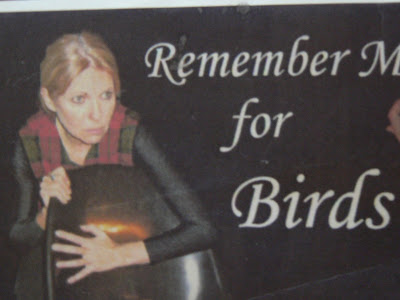 With a degree in the Social Sciences from The University of Western Ontario, London, Cheryl McLean worked for close to twenty years in publishing, corporate communications and adult education. She also had an ongoing interest in the performing arts producing and directing regional theatre in Ontario. Returning to graduate school at Concordia University, Montreal, she worked for two years (01 - 03) as a researcher and group therapist conducting group sessions with older persons at Maimonides Geriatric Hospital and The Rene Cassin Institute of Social Gerontology of Quebec "Over 60 Mental Health Program".

To help raise awareness about issues related to aging, mental health and autonomy, as her thesis presentation, she wrote and acted in a one woman performance called "Remember Me for Birds" based on this research and these experiences.

This work in its early stages had been influenced in field work by therapeutic approaches drawing from theoretical models and techniques utilized in current approaches in drama and expressive group work and drama therapy (Current Approaches in Drama Therapy, 2000), theatre for social change, Augusto Boal, (Theatre of the Oppressed) drama with special populations..realism and Stanislavski influenced acting approaches while working in projects for two years under the direction of Dr. Muriel Gold (Therapy Through Drama: The Fictional Family,2000) and, later, qualitative/narrative and performative approaches, writings by Dr. Norman K. Denzin, (Performance Ethnography, Critical Pedagogy and the Politics of Culture, 2003) and developments in the emerging playwriting and research performance genre, ethnodrama, Johnny Saldana, (Ethnodrama An Anthology of Reality Theatre, 2005).

Working with her Jewish clients, some of them Holocaust survivors, Cheryl had an opportunity to help individuals express their stories (through storytelling, poetry, enactments, other dramatic and expressive methods as well as through one on one interviews). These accounts became the basis for a performance script as did transcripts, oral histories, witness accounts, historical material, topical news stories and current events taking place in Montreal at the time. ( The real names of participants were not used, nor were locations mentioned. In some cases compilation characters were created to protect identities but the authenticity of the stories remained.)

"There is a paternalism with regard to "the elderly" (older persons). This often results in their autonomy being assumed to be less than it is or taken away against their will. I learned I am inappropriately detached from people. I attended because I was curious and I am glad I came. I learned about others but it (the performance) taught me about myself." Researcher, Elder Abuse

The original 30 minute performance was directed by Dr. Muriel Gold , formerly Artistic Director of the Saidye Bronfman Theatre, Montreal. Cheryl had a special opportunity while in Montreal to work as an actor with Muriel in projects for two years studying acting.. (Stanislavski influenced approaches/realism) and training approaches. On April 14, 2003, a solo performance was held for social workers and clinicians at The Rene Cassin Institute of Social Gerontology. Over the next two years following the original performance, the work as an "ethnodrama" advanced through several development phases as more personal and historical narratives were added, as well as written contributions from professionals who worked in aging and health, for example, an audio taped narrative written by a nurse (herself 76 years old) who had directly experienced work with the aged in mental health and palliative care settings.

In later performances symbol and metaphor became more important and objects were presented in a "collaged" back drop drawing on significant items identified on site and from true stories. T

hese objects along with news items etc. were used to visually juxtapose and contrast concepts and ideas from past and present.

The research performance in its final form had evolved to become a full one hour ethnodrama. (For more on this genre see, Saldana, J., Ethnodrama An Anthology of Reality Theatre, AltaMira Press) Acting solo in multiple roles, as well as performing personal narratives, Cheryl presented "Remember Me for Birds" for hundreds of academics, healthcare professionals and students at universities, health organizations, medical schools and national conferences in Canada and the U.S.

In follow up discussions and through feedback questionnaires, many audience members commented on the authenticity of what they experienced as witnesses to the stories in the ethnodrama with reflective comments about the value of such work in helping to "re-illuminate" the importance of re/membering the "patient" or "client" as a person with a life, a past history and a unique story.

"Remember Me for Birds" was featured in May 2005 as the keynote performance at The Canadian Association of Schools of Social Work Conference held in conjunction with The Congress of the Humanities and Social Sciences at The University of Western Ontario, London and later that year for the McGill Interdisciplinary Geriatric Seminar, McGill Medical School, Montreal.

The performance was produced independently as an educational film in 2007.

See a video clip from the performance "Remember Me for Birds"

"Ethnotheatre employs the traditional craft and artistic techniques of theatre production to mount for an audience a live performance event of research participants' experiences and/or the researcher's interpretations of data. This research..meaning to investigate, in its broadest sense, can be conducted by artists, scholars or even by the participants themselves in such diverse fields of study as sociology, anthropology, psychology, education, health care, women's studies, justice studies, ethnic studies, cultural studies, political science, journalism, human communication, performance studies and theatre. The goal is to investigate a particular facet of the human condition for the purposes of adapting those observations and insights into a performance medium..."
Johnny Saldana, from "Ethnodrama: An Anthology of Reality Theatre, AltaMira Press, 2005, (pp. l-2)

"Ethnoperformances are postmodern often building a type of narrative collage that critiques culture. Speakers can "leap forward and backward in time" from present to past, presenting real news accounts against dramatic historic enactments of the past, using poems, monologues, dialogues, voice-overs and interior streams of consciousness."
Norman K. Denzin, from "Performance Ethnography, Critical Pedagogy and the Politics of Culture", Sage Publications, Thousand Oaks, California, 2003.