Youth and Homelessness, Toronto Youth Use Arts to Express True Stories of Life on the Streets 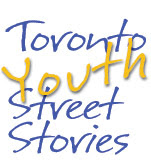 We heard recently from CCAHTE subscriber and researcher Katharine King about the Youth Pathways Project http://www.tyss.org/process.html , a youth research project at the Centre for Addiction and Mental Health, which took place in collaboration with the University of Toronto. This research helped offer an opportunity and a place for youth to share their voices and express true stories about living and surviving on the streets of Toronto.
In a recent email Katharine reported, " I've been a subscriber to CCAHTE for several months; it is a valuable resource for those of us doing interdisciplinary work in the arts and health,education and research."

"Toronto Youth Street Stories (TYSS) grew out of the YPP, Youth Pathways Project http://www.tyss.org/process.html conducted by researchers at the Centre for Addiction and Mental Health and the University of Toronto. The YPP study focussed on issues of ethnic and sexual diversity, drug use, and mental health faced by youth living in high-risk environments on or close to the street. The study generated new knowledge about the quality of life experienced by street-involved youth, as well as factors that influence their pathways into either a more stable and healthy adulthood, or a continued existence on the street. The YPP findings are critical to informing policy related to substance abuse treatment, child protection, mental health promotion, and violence prevention in street-involved youth.
The insights and anecdotes that the young people shared gave an extra dimension to the data and statistics generated by the surveys and interviews. These youth obviously had a desire to share their stories, but often lacked the means and opportunity to do so.
TYSS was created as an innovative way to collect these stories, disseminate some of the knowledge gained from these studies, and paint a multi-dimensional picture of the realities experienced by youth living on or near the streets of a major Canadian city.
In the summer of 2007, a team of researchers and facilitators organized a series of writing workshops at different youth agencies in downtown Toronto. With the assistance of peer facilitators, local authors led the workshops by sharing their writing and challenging the youth to create their own characters, rhythms, and writing styles. The youth wrote stories, poems, and short essays dealing with issues one might expect from a street-involved population, such as physical and sexual abuse, drug use, and violence. But they also wrote about pregnancy, parenting, work, money, family, love, music, beauty, religion, sexuality, isolation, and joy."
Pitiful
Curse us for the cards that life has dealt us
You hate us because we portray a “bad image” of your streets
Yet right in front of us you discard your empty coffee cups
Polluting the very streets you accuse us of destroying.....
I’m addicted to the streets now
To the rain that pours and washes away the scars and pain
To the snow that falls and smothers my flame of anger
To the winds that blow and clear away the debris of hurt...
From the poem "How Dare You" By Poet/ "No Compromise"
see more TYSS youth contributions at http://www.tyss.org/poetry.html
Posted by Cheryl McLean at 11:20 AM