The International Journal of The Creative Arts in Interdisciplinary Practice, IJCAIP, is pleased to announce that the research book,"Creative Arts in Interdisciplinary Practice, Inquiries for Hope and Change", Editor Cheryl L. McLean, Publisher IJCAIP, Associate Editor, Robert Kelly Ph.D., Faculty of Fine Art, University of Calgary, (Publisher, Detselig Temeron Press, Calgary) has been nominated for The International Center for Qualitative Inquiry, qualitative book award. This award is conferred annually to a member of the qualitative and ethnographic community who has published an English-language book that helps contribute to the study and practice of qualitative approaches. Criteria include success in experimenting with new and traditional writing forms, inclusion of critical reflections on the writing and research process, contributions to living meaningful lives, and insights into creating a socially just world.

ICQI hosts the International Congress of Qualitative Inquiry May 18-21, 2011

at The University of Illinois, Urbana Champaign.

The recipient will be announced by the judges in 2011 and the award will be presented at the annual ICQI meeting. It is expected there will be many exceptionally high quality nominations submitted for this prestigious qualitative book award. For our editors, publisher and all who contributed to our research text it will be an honour to be a part of the process as we participate in this international competition.

"The book "Creative Arts in Interdisciplinary Practice, Inquiries for Hope and Change" was created as an illustrative collection of articles which would show by example how the creative arts in research working actively with qualitative (and other aligned approaches) can help point to a new path for hope and change while making a meaningful difference for individuals and society. This is a contemporary research collection targeted to a very broad interdisciplinary audience which crosses borders and includes academics and non academics, educators, researchers and artists, healthcare professionals, those active in social service and advocacy work, activists and policymakers. In keeping with our broad communication goals, articles and chapters are written intelligently in accessible language and include illustrative examples of work in practice. It was our intention to show, by way of example, the considerable breadth and scope of the research. The accounts traverse methodological borders while addressing multiple challenges and serving diverse populations in practice. That being said articles share a common interest in mobilizing communities for justice and social change."

Posted by Cheryl McLean at 6:32 AM 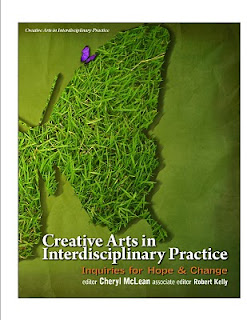 The art of music may stir the soul but scientists are learning more each day about how it affects our development. This documentary, part of TVO’s World of Wonder science, math and technology programming, examines the role music plays in developing our brains. Beginning with premature infants in neonatal intensive care wards, the film moves through the role of music in enhancing performance in childhood to the role of music therapy in hospital patients, and finally looks at older persons. (from the website)

Posted by Cheryl McLean at 7:31 AM