SEND US YOUR PROPOSALS
For information please visit:
www.musictherapy.ca


I thought you may enjoy this music therapy video excerpt at Youtube created by Brandon Moore CM
front row seats at Youtube see:
http://www.youtube.com/watch?v=aPRkgkZHjqI
Posted by Cheryl McLean at 3:55 PM

Subscriber Shares Story of Art and Strength of Bamboo 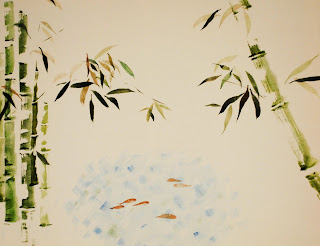 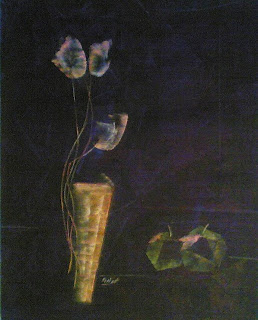 
We recently heard from IJCAIP subscriber, Zarei Fatemeh, an artist who is currently working in the medical sciences field in Iran. She shares with us below the story of her art and work in health and education.

" I am a minimalist painter so I try to see things as abstract and simple based on a world that is free of bureaucratic complexity and complexity in relationship and discipline. In a complex world we can tend to see, feel and behave in complex ways. One of my artistic symbols is bamboo. Bamboo may be seen as a simple plant that grows in water but it is, in fact, a straight and hard plant. We see in this simple and clear context that even free of nutrients, the strength and power of the bamboo is revealed. Health also is like this. A simple clear mind is healthier than an over complicated one."

"I have been an artist for eight years and have participated in over 10 art exhibits in Iran. My work is created in acrylic and water colour. I work in health education and promotion with an MS degree from The University of Medical Sciences, Iran. I am working at Qazin University in the medical science field as a member of the health faculty, secretariat of health promotion unit. My aspiration is to continue my major in health promoting my art as well."

Posted by Cheryl McLean at 1:31 PM 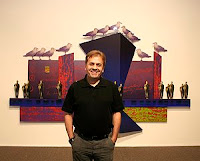 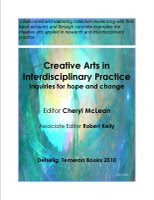 ctice, Inquiries for Hope and Change is a contemporary research text which will feature a comprehensive collection of informative and illustrative accounts from leading health researchers, social scientists, artists, therapists, nurse educators and professionals, stories of topical research along with dynamic examples demonstrating how the creative arts in many forms as inquiry and in action applied across disciplines can make a critical difference for individuals and society as a whole.”

What are a few of the general topic areas which are featured in the book?

Summer at IJCAIP has been productive and we have received outstanding research based article chapters and submissions for "Creative Arts in Interdisciplinary Practice, Inquiries for Hope and Change" from leaders across Canada the USA, UK and Australia representing Education and The Fine Arts, Humanities, Medicine/Healthcare and the Social Sciences. This definitive text, among the first texts of its kind in this interdisciplinary field, will bring together an outstanding cross section of researchers and professionals sharing their experiences and knowledge, their inquiries and methods in compelling articles about the creative arts applied in research and interdisciplinary practice for hope and change.

This photographic event includes over 60 photographs of breast cancer survivors and their stories. Four of these photographs will be displayed in conjunction with PhotoSensitive's Cancer Project.
A partial installment of The Breast Cancer Project will be exhibited at The Arts Project, 203 Dundas St, London, Ontario from October 6 to October 16th. The opening night gala, "Something Beautiful" will be hosted on October 8th, from 6 - 10pm, with speeches beginning at 8pm. All funds raised are going to the Translational Breast Cancer Research Unit at the London Regional Cancer Program .

See a Youtube video excerpt about the project
Posted by Cheryl McLean at 3:16 PM

NFB-TVO CALLING CARD PROGRAM: AN OPPORTUNITY FOR DOC CREATORS IN ONTARIO TO MAKE A NEW MEDIA OR BROADCAST DOCUMENTARY

Documentaries must be original, character-driven narratives with a focus on social, political and cultural issues. The submission deadline is August 31, 2009. The winning team in each category (new media and television broadcast) will be awarded $45,000 and receive mentorship from members of the film and new-media community to take their doc from concept to television premiere or online launch.

MUSIC IS MEDICINE: Sacred Singing, Healing Harmonies
Workshops with Don Hill
Modern neuroscience is affirming what vocalists and shamans have known for years: Singing is healthy for you and specific vocal styles that play on 'harmonic overtones' stimulate the sense of well-being.

In this introductory workshop, you will hear and learn how Tibetan monks, Gregorian chanters and Mongolian overtone singers create the powerful healing and meditative qualities associated with ritual chanting and overtone harmonics.

A complementary instructional DVD is bundled with the workshop.

The introductory workshop will be held in MONTREAL: Friday 10 JULY (beginning at 7 PM) and all day Saturday 11 JULY at 5706 Queen Mary Road (Hampstead).

In EDMONTON: Friday 21 AUGUST (beginning at 7 PM) and all day Saturday 22 AUGUST at the Westwood Unitarian Congregation church at 11135 - 65 Avenue (close to the Parkallen community centre).


Don Hill, formerly host of CBC's "Tapestry ", is a member of the creative faculty and the podcast voice of The Leadership Lab at the Banff Centre's Leadership Development Program. His counsel is part of a gathering of leading edge thinkers from the areas of leadership, popular media and the voice and vocal arts. He has been commissioned (2009) to develop ‘sound explorer’, a new acoustic modality for teaching the art of leadership. With the CKUA Radio Network (2007-2009), a listener-supported public broadcaster in Alberta, Don created and hosted Inspiring Leadership (20 half-hour episodes), and Inspiring Leadership 2.0, a thirteen-part documentary series, which featured conversations with over one hundred leaders about the challenges of sustainability and environmental leadership in the 21st century.

Advance registration for Music is Medicine required with annehill (at) telus.net
Posted by Cheryl McLean at 10:05 AM