Sexual Abuse Film "When Nobody's Looking" May 31 in Toronto 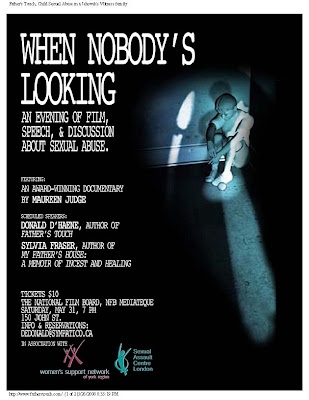 May is Sexual Assault Awareness Month.
Maureen Judge, Sylvia Fraser and Donald D'Haene
help raise awareness about this issue with the film "When Nobody's Looking"
May is sexual assault awareness and prevention month. To help raise awareness and encourage dialogue around this issue, The Women's Support Network of York Region and the Sexual Assault Centre London are presenting a screening of Maureen Judge’s award winning film When Nobody’s Looking , featuring presentations from two authors, Sylvia Fraser and Donald D’Haene, who will share their own personal experiences of hurt and healing.


To be held at The National Film Board Mediatheque
150 John Street, Toronto

Tickets are $10 and can be purchased at the door. Proceeds will go to the Women’s Support Network of York Region and the Sexual Assault Centre London.
An evening of film, speech and discussion about sexual abuse.