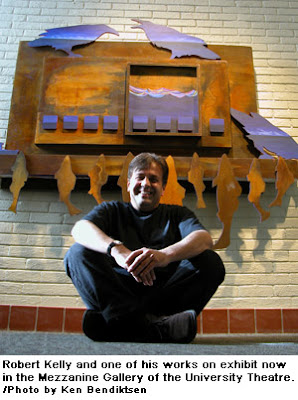 Carrying on with our discussions about creative process and education I invited CCAHTE Journal Advisory Board Member Robert Kelly Ph.D., Associate Professor, educator and artist, University of Calgary, Fine Arts, to share his thoughts about Creativity in Education. Below Robert writes about his own work, "The Concept of Raven".


"The Concept of Raven studio exploration has evolved over the past several years. It has involved much research and several rounds of divergence and convergence in its development.
Personal practice has the potential to provide insight into generative and creative process and inevitably educational practice. The Concept of Raven series has occurred concurrently with other major studio explorations and continues today.

The instigating moment for this exploration was a conversation with a colleague who lived on Baffin Island. She shared a story about how Inuit and non-Inuit perceptions of the raven were so different. Having grown up in the north country where ravens were always present, this story resonated with images of my childhood. The anecdote of my colleague seemed to strike some kind of emotional chord. My recollection of the raven was one of a disheveled scavenger. Ruffled feathers around the neck and bold personality were not the most endearing characteristics. The raven was remembered mostly in a winter context, usually by itself, in the birch forest. This mischievous bird was a symbol in many ways of our collective perception of inferiority fuelled by our isolation and perpetually losing hockey teams. We seemed to inadvertently assume its irreverence as well.

This instigating moment is an example of mining a strong childhood perception. As art educators it is important to note that each student has a history as important as our own. These histories are important resources for the mining of ideas and themes.
The Dialogue of Idea Generation
This exploration was started with no fixed goal in sight. The early stages of this work were almost entirely exploratory and generative. A variety of scientific, religious and miscellaneous sources were collected and read. Continual exploring and gathering of source material occurred knowing that these thoughts would eventually find form. Statements of interest and intrigue about the raven were recorded in a sketchbook. As the list of statements grew, they seemed to take on a life and energy of their own. Each statement alluded to the human quality of this creature, a bird documented to be highly intelligent. The most intriguing statements were the ones that were ambiguous in nature and in some ways comedic. “Sometimes raven fly about and do stunts in the air as if enjoying themselves” is one of the first statements that was recorded. Some of the others that followed included “ ravens grow largely silent at the onset of breeding season” and “ravens have been known to steal fish from otters.” One of the main advantages of generating many ideas and giving them form is that a creative dialogue ensues between the artist and his or her unfolding thoughts. The artist gives thought form. The form informs the artist and a creative dynamic is set in motion. Art educators become part of this dialogue with their students. Students engaged in this dynamic dialogue alongside teachers who are also engaged in their own creative dialogue can make for a charged environment that enables idea generation.

"The artist gives thought form, the form informs the artist and creative dynamic is set in motion."
Robert Kelly

And more from Robert Kelly on creativity in education;

"Creativity is a central source of meaning in our lives. Improvisation, invention and innovation reveal much about us that is both interesting and very human. Engaging in acts of creativity enables us to engage our life world more fully. The excitement of generating ideas, experimenting, and becoming vulnerable makes for a passionate world that runs across disciplines and all walks of life.
Our predominant learning culture of measurement and standardization is contrasted against a learning culture of creativity. How can these cultures co-exist? What enables individual creativity? What enables creativity within educational systems? What holds us back? "

The Concept of Raven uses the raven as icon to mirror the human condition. The series is not just a simple study of ravens. It is a diverse exploration of land, spirit and culture using raven as a vehicle. The raven serves as an icon for all three of these strands making it a convenient concept with which to explore ourselves.

Born in the shield country of northern Ontario, Kelly has an extensive background in the archaeology and ethnography of Canada’s indigenous peoples.

Posted by Cheryl McLean at 8:27 AM