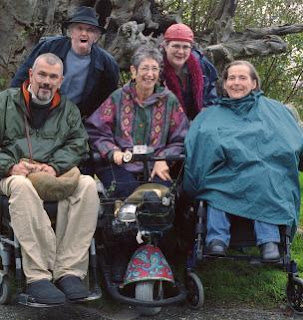 "Art, activism and disability are the starting point for what unfolds as a funny and intimate portrait of five surprising individuals. Director Bonnie Sherr Klein (Not a Love Story, and Speaking Our Peace) has been a pioneer of women's cinema and an inspiration to a generation of filmmakers around the world. SHAMELESS: The ART of Disability marks Klein's return to a career interrupted by a catastrophic stroke in 1987. Always the activist, she now turns the lens on the world of disability culture, and ultimately, the transformative power of art.

Joining Klein are a group of artists with diverse (dis)abilities.Humourist David Roche is taking his one man show off-Broadway, The Church of 80% Sincerity, in New York. Poet and scholar Catherine Frazeeis navigating a jam-packed schedule of teaching and speaking engagements. Dancer, choreographer and impresario Geoff McMurchy is producing KickstART!, an international festival of disability art. Sculptor and writer Persimmon Blackbridge is creating mixed mediaportraits from "meaningful junk".

"What the critics are saying about SHAMELESS:

"What emerges in SHAMELESS is an intimate look at five artists, all dealing with attitudes towards disability, all finding their way through a culture that views them with revulsion or even suggests they would be better off dead. Klein manages to pull it off, amazingly, without a hint of sentimentality."Matthew Hays, The Globe and Mail

"Other films of this genre are hopelessly influenced by the"us-and-them" approach. Bonnie has done a tremendous job of allowing the viewer in without putting the subjects in a circuscage."Lisa Bendall, Former Editor of Abilities Magazine, and Author. "
See a brief Youtube Video clip http://www.youtube.com/watch?v=zQlYt_eVmdM
More information about SHAMELESS:
www.nfb.ca/shameless

Bonnie Sherr Klein's SHAMELESS: The ART of Disability
See it Sunday, May 13 at 5PM PT and 8PM ET on BRAVO (Canada only)
Posted by Cheryl McLean at 8:23 AM